Home › That's Another Story › Instead 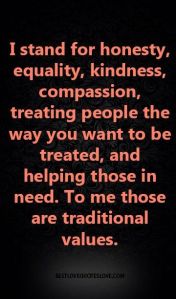 A few years ago, a series of popular books were published that offered readers suggestions about making healthier food choices by swapping out an unhealthy food for a healthy one.  The idea focused, not on the deprivation touted by the diet industry, but on choosing foods that satisfy hunger and meet nutritional needs.  So, you may be giving up one thing, while gaining something else.  The end result being that your choices will make or break your daily diet. I was reminded of these books this weekend, but for reasons that had nothing to do with food.

As social media erupted with strong, very strong, opinions shared  by those at both ends of the political spectrum and by those who fall somewhere along the continuum, I felt emotions that ranged from frustration to anger to sadness.  Many people were talking, but it seemed as if not too many people were listening.  The din grew louder, and my mood grew darker.

As I searched for a common ground, I continued to observe what is being regurgitated all over social media, around the workplace water cooler, in various social circles, and at the family dining table.  The result is my desperate attempt to wrap my brain around all of it and my humble version of how to cope with it.

These suggestions may be too simplistic or optimistic, and honestly, I have great reservations about even sharing them.  Part of me feels like the last thing the world needs is another take on the current political climate, and another part of me does not want to subject myself to the intense criticism that others have faced when they have shared their perspectives.  That said, I write for myself first, but because I share it publicly, I also hope that it resonates, on some level or another, with at least one other person.  In the end, I want liberty and justice for all, here and abroad, and that is a dream that I hope we all work together to make come true.

Tags: coping, Instead, politics, that's another story, this instead of that, working together